Can you believe I almost let it happen again? What is IT you ask? IT is another flea infestation. I have had two pretty bad ones in the past. The first one was due to lack of education on my part. The second was because I was duped by an online company selling flea medication. After the second one, I swore I would never let it happen again and did lots of research. I learned about all the different pesticides used to kill fleas and why the addition of an insect growth regulator is essential to a successful insect control program. Fortunately, this time I recognized the symptoms pretty quickly and jumped right on getting the fleas under control. 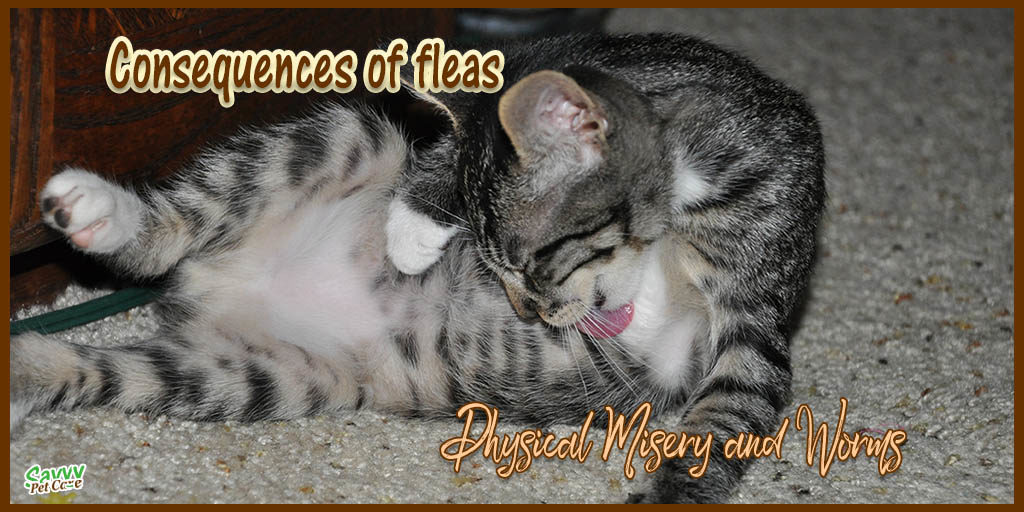 How did I let this flea infestation happen?

For the last two years we lived in Pine Grove, I didn’t use any spot-on flea treatment and still had no fleas. Looking back at it now, I’m sure that it’s because, for that period of time, I had been regularly spraying my house with insect growth regulator for ants and other creepy, crawlies. Read my post about My Favorite Hack in the War Against Insect Pests to learn how I came to use this product.

When we arrived in Texas, fleas never even crossed my mind. My dad had a dog and a cat and neither had fleas, but he treated both of them every month. As the weather warmed up and my cats started going out in the catio, I noticed they started scratching a little bit. Still oblivious to the idea of fleas, I thought maybe there was something here they were allergic to. Then the real tell-tale signs started. The scratching intensified, they didn’t want to sleep in their usual places, and they started “traveling” on the furniture rather than the floor. 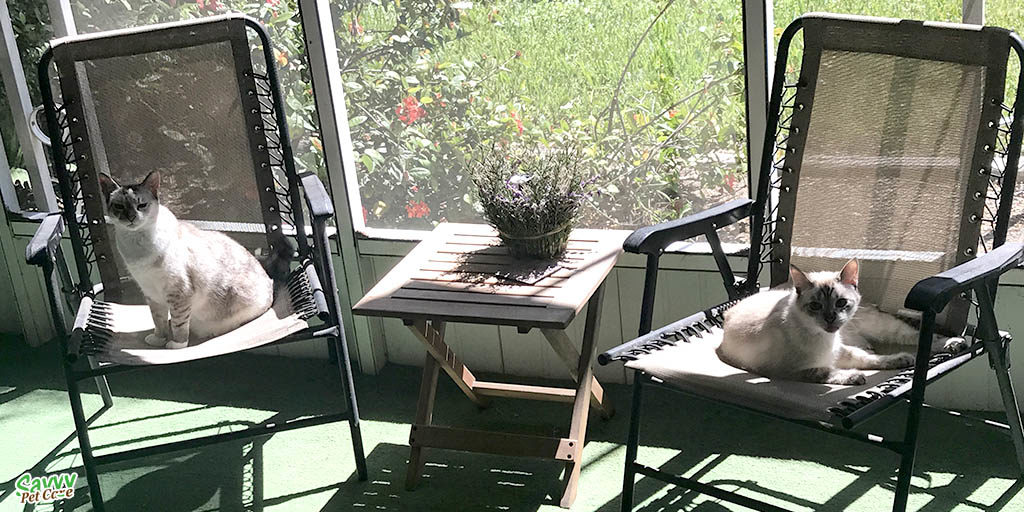 Then it hit me! OMG! FLEAS. I checked them multiple times for fleas and didn’t find any but then there it was. The dreaded flea dirt. It was totally my fault and I felt so bad that they were once again suffering from the misery of biting fleas for lack of a simple, monthly application of a flea treatment.

I didn’t even have any spot-on treatment.  I immediately ordered some and put it on them as soon as it arrived two days later. In the meantime, I sprayed the house and catio with insect growth regulator that I had recently purchased. After three weeks, we are almost back to normal.

Now that things are settling down, I’m thinking my two male cats are looking a little thin and wondering if they may have gotten worms from the fleas.

How do pets get worms?

What kind of worms do cats get from fleas?

There are lots of different worms but the most common for dogs are hookworms, whipworms, roundworms, and tapeworms. Cats get the same except for whipworms.

Cats get tapeworms from fleas. When they groom, they can eat up to 50% of the fleas on their body. Ingested fleas carrying the tapeworm larvae end up in the cat’s gut where they can cause a myriad of symptoms.

When cats groom, they can eat up to 50% of the fleas on their body. Ingested fleas carrying the tapeworm larvae end up in the cat's gut. #fleas #worms #cats Click To Tweet

Signs that your cat may have intestinal worms from fleas

Often, you will not see any physical symptoms of tapeworm other than rice-like segments in your cat’s feces or around it’s anus. Some symptoms you might see, especially in severe cases are:

How do you get rid of worms?

The only ingredient effective against tapeworms in pets is praziquantel, so be sure any dewormer you get for tapeworms has it as the active ingredient. This is an expensive drug and the reason dewormers that kill tapeworms are on the pricey side. This one is from a well-known provider.

According to the CDC, the only ingredient effective against tapeworms in pets is praziquantel. #fleas #worms #pets Click To Tweet

Should you deworm your cat on a regular basis?

As a cat becomes an adult, it may develop an immunity to hookworms and roundworms. These parasites move around in the body causing irritation and the cat’s body responds by producing antibodies. Tapeworms remain in the intestines where the cat’s immune system doesn’t recognize it as a foreign body. Therefore, the animal never develops an immunity to it.

I read several different recommendations about how often to deworm your cat for tapeworms. The one that made the most sense to me said every 3-6 months and the better you control fleas, the less often you need to be concerned about worms. I have never dewormed on a regular schedule, except when I was fostering and many cats with unknown histories came and went.

Have you had a flea infestation that led to tapeworms in your cat?

I’d love to hear about your experience in the comments below. 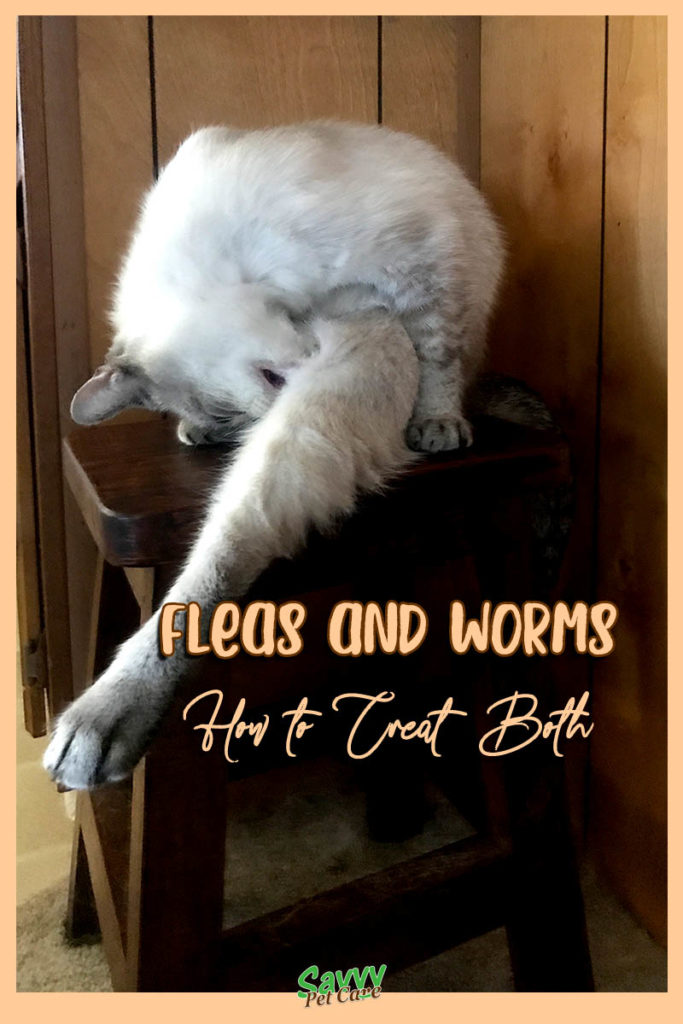 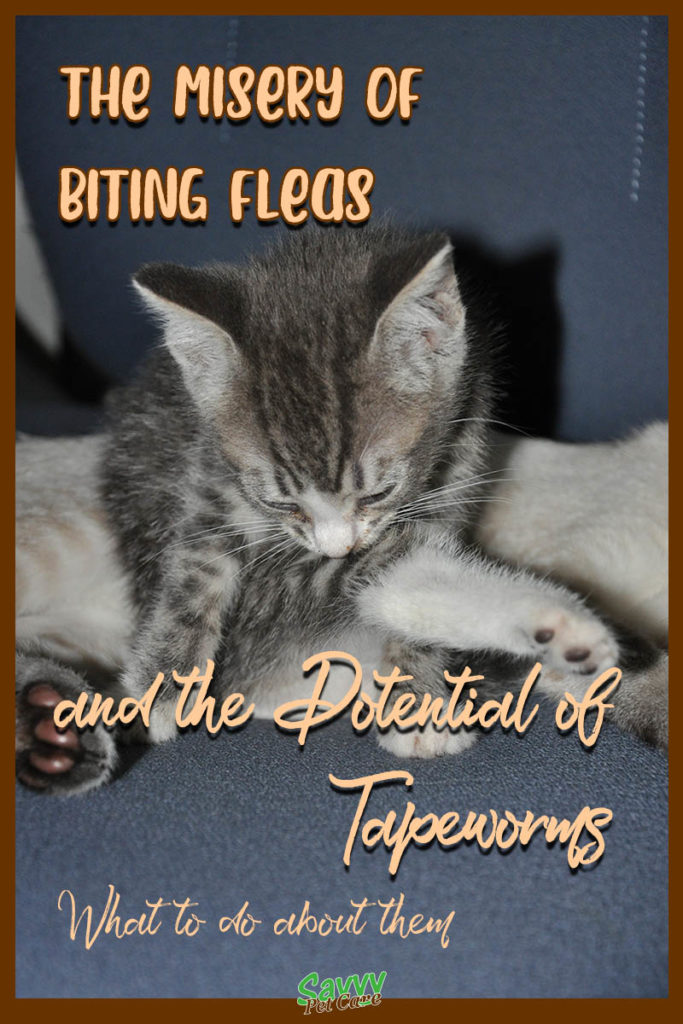