About three years ago, MeoowzResQ was turned onto a discount pet medication website by another rescue. I do some of the buying for MeoowzResQ so I was asked to research this potential opportunity. Vaccination Services (their website is fleastuff.com) has a membership program and once you pay a reasonable fee, you receive a 20% additional discount on the already discounted products they sell. Sounds pretty good, right? Well, as they say, let the buyer beware.

When I first contacted this company, our main interest was for Advantage II. Their representative explained to me that Advantage and Advantage II are the same–they just updated their packaging. Trusting that the “expert” new what he was talking about, I let him sell me Advantage.

Over the next two years, we kept getting complaints from fosters that they 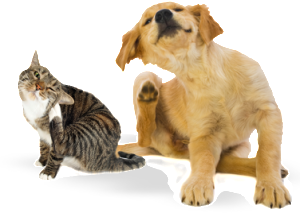 couldn’t get rid of fleas. I kept telling them that if they were using the Advantage as directed and vacuuming regularly, this should not be happening.

When we kept getting complaints, I started doing some research. I discovered that Advantage and Advantage II are NOT the same. Advantage II contains a growth regulator that plain Advantage does not have. This keeps hatching eggs from growing into adult fleas thus breaking the life cycle.

So, several months ago, when I placed our order, I very specifically ordered Advantage II and said, “Do not send us regular Advantage,” and have reminded them of that with every order. I had had a flea infestation and certainly did not want to have another!

Well, about three months ago, I started seeing the telltale signs. My cats were scratching. They started running across the carpet and eventually refused to be on the carpet. They would move across rooms on the furniture. They preferred to lay on the kitchen floor or other hard surfaces like the kitchen counters. Ugh!

I had been using the regular Advantage that we had been getting in the past so I went to the rescue to get some of the new Advantage II they had been getting. When I was handed a tube, it said “Advantage” on it, not Advantage II. The only ingredient listed was the pesticide. I figured this must have been an old tube but was suspicious. It was time to reorder so I asked them to keep all the packaging when the new order arrived.

Of course, I called the company. The gentleman again began to try to tell me they are the same. When I confronted him on the ingredients, he said, “Return it to me and I’ll give you a full refund.” When I wanted it replaced with Advantage II, he finally admitted that they don’t actually have Advantage II, only what they shipped.

So, I have been fighting another flea infestation! At least this one is fairly mild compared to the last one as I recognized the signs early. I still have not actually seen any fleas in the carpet, etc., only on the cats. During my last infestation, they were jumping all over the place, including on me!

Needless to say, we have found another, reliable source for our Advantage II. Here is an article about some other online scams to avoid: