Home This and That The Glorious Tabby Cat

Some say that tabby cat personalities are distinct from other cats 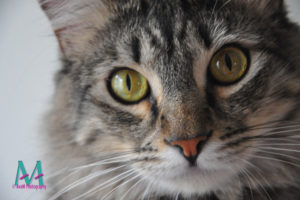 in the sense that they are more like the personalities of dogs. Tabby cats love to play and explore. They’ll follow you around like a puppy and some will even teach their humans to play fetch. Tabby cats are also considered to be more intelligent than those of other types by many. If you do a simple search online, you’ll see that tabby cats are often rated as being of higher intelligence than other types by both breeders and cat enthusiasts. They are amusing, clever, warmly affectionate and make wonderful companions.

What is a Tabby? 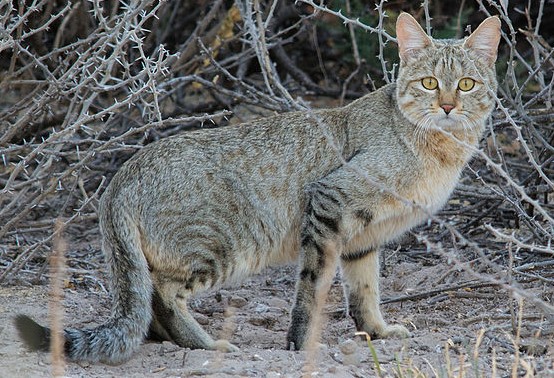 Tabby cats are often mistakenly thought of as being a particular breed of cat, but it is the coat pattern that is known as “tabby.” Today’s house cats originated from the African wildcat which has similar markings to those we see on tabby cats, an effective form of camouflage. The tabby gene is more dominate than any other coat color gene. This is one of the reasons most second or third generation feral cats are tabbies. Natural selection made the tabby gene more dominant because the tabby coat is better camouflage than solid or bicolor coats, and thus an individual with a tabby coat would have better chances of survival because it could hunt and avoid predators more easily.

The gene for the tabby pattern can be found in all domestic cats. 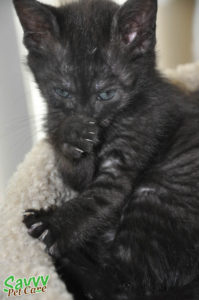 Look at a “solid” black cat in the sun some day and see if you can find the hidden tabby markings. And have you ever seen a solid red or orange or cream cat without the familiar tabby markings? You won’t, because the gene that makes a cat red or cream also makes the tabby markings visible. The tabby pattern is so popular that it can be found in many pedigreed cats today, and is accepted in a number of breeds by the most popular registries. 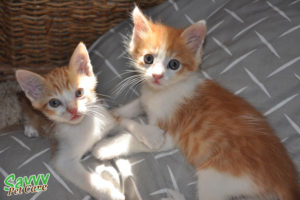 There are many variations of the tabby pattern and tabby cats can be found with stripes, spots, ticks and swirls, and in various colors – brown tabbies, silver tabbies, ginger or orange tabbies, gray or blue tabbies and red tabbies Although there are many variations of each, the tabby pattern falls into four basic classes. A fifth includes tabby as part of another basic color pattern, e.g. the “patched” tabby, which may be a calico or tortoiseshell cat with tabby patches (the latter is called a “torbie”). 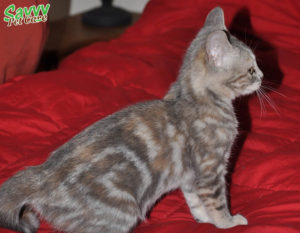 It is this pattern that appears most often on tabbies. The classic has large swirls or blotches that end in a circular pattern or “target” at the sides. Three broad lines run from the neck to the tail, and around the neck there are wide bands of color known as a necklace. Classic tabby cats’ tails have broad bands, as do their legs, and the belly will have a row of vest button blotches. On the shoulders are patterns that are very similar to butterfly wings. 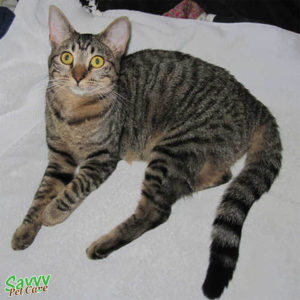 Mackerel tabby markings closely correspond to the patterns seen on African wildcats. Some people suggest that mackerel tabbies should have been called classic, because their coat pattern was the original, and more reminiscent of the domestic cats origins. Mackerel tabbies have narrow striped rings around their tail and legs, solid or broken stripes down their sides and one or more ‘necklaces’ on the front of their chests. Along the belly of the mackerel tabby you will find a double row of ‘vest buttons.’ 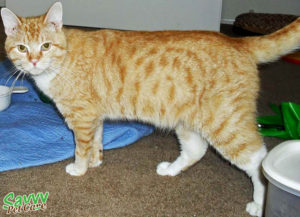 The dark blotches of the coat pattern of some tabbies are formed into oval or round spots. Sometimes the spots run in lines, this is often known as the interrupted mackerel pattern, however whether these spots developed from mackerel tabbies, or are a completely separate mutation remains unknown. Spotted tabbies usually show a faint trace of a necklace and have a line of spots, or sometimes blotches, running from the neck to the very tip of their tail. The Ocicat, Bengal and American Bobtail are good examples of the spotted tabby pattern. 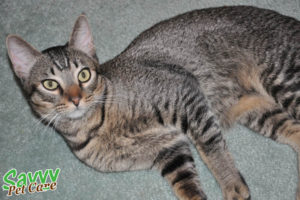 Cats with ticked coat markings do not display the usual stripes, blotches or swirls of the tabby pattern and do not at first glance seem to be tabby cats at all. A closer look will show that the hairs are in fact striped with light and dark colored bands, these are known as agouti hairs, most tabbies will have some agouti hairs that make up part of their coat pattern. The faces of ticked (or agouti) tabbies will show the traditional ‘M’ marking, and ticked tabbies may show a faint necklace. The Abyssinian cat is a very good example of a ticked tabby and their coats often appear to shimmer in the sunlight due to the agouti hairs. 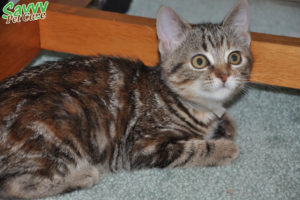 How did Tabby Cats get their ‘M’?

All tabbies have an “M” marking on their forehead, and on some this mark is very distinct. The ‘M’ is often referred to as “the mark of the true tabby.” There are several amusing legends about how tabby cats got their “M.” 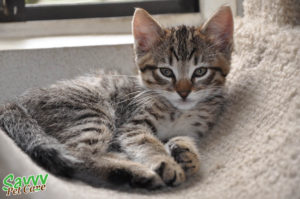 The most popular of these legends tells us that when the baby Jesus was lying in the manger he started to shiver with the cold. Mary covered the baby with blankets but still he kept shivering. Mary then asked all the animals to move closer to the manger so that their body heat would warm Jesus. The animals stood as close to the manger as they could but the baby Jesus remained cold and shivering. After a time a small cat with tabby markings jumped into the manger and snuggled next to Jesus. Before long the baby had stopped shivering and was sound asleep, contented and warm. In her gratitude to the tabby cat, Mary made the mark of her own initial upon the cat’s forehead so that tabby cats will forever remind the world of how they saved Jesus from the cold.

A legend from the Islamic world recounts that Mohammed had a tabby cat called Muezza who once saved his masters life by slaying a snake that had crawled up Mohammed’s sleeve. Later, when it was time to attend prayers, the cat had fallen asleep upon the sleeve, so to avoid disturbing Muezza, Mohammed cut the sleeve from his garment. From that day on all tabbies were born with the ‘M’ marking on their forehead to remind all that see them that Mohammed loved cats, and that cats should always be respected.

Why are they called Tabby?

The name tabby is believed to have come from the word atabi a type of silk spun in the Attabiah region of Baghdad. This silk was exported in large quantities to the British Isles where it was noticed how similar the stripped pattern was to the coat of the tiger cat. These tiger cats soon started to be called tabbi cats and later tabby cats.