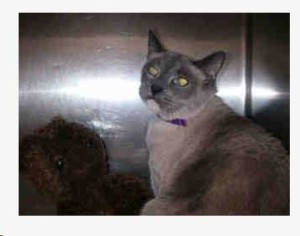 AJ and his teddy bear at the shelter

Well, isn’t this a royal mess! And who is the one suffering? Poor AJ who doesn’t have a clue why he is being shuttled all over Southern California. If you saw our story on September 10th, you know that 10-year-old AJ and his teddy bear were dumped at the Castaic shelter by his owners.

His story spread on Facebook like wildfire thanks to the rescue community and other animal lovers who saw his post. MeoowzResQ was contacted through the rescue network and stepped up to save him. They were in the process of sending a transporter to get him when they were informed that he had been adopted. Someone posted on MeoowzResQ’s Facebook page that the adopter had put a deposit to hold him but the shelter wouldn’t release him until Friday.

MeoowzResQ was given the following story on that Friday by a friend of the adopter. “When the adopter, Tam, got there to pick him up, there was an older lady who was sitting and playing with him, wanting to adopt him. She told them that she had just had to put her cat to sleep and her other cat was despondent. Tam also found out that AJ didn’t get along well with dogs (something the shelter hadn’t mentioned before and Tam has two dogs.) So, Tam let the 85-year-old lady take AJ and even paid the adoption fees for her. AJ has a good home with a lady who cried when she was told that she could take him.” What a lovely story, but it appears to be inaccurate.

After this update was posted, a THIRD person posted that AJ was actually adopted on Wednesday by someone else!!! Unfortunately, there doesn’t seem to be any “getting to the bottom” of what happened on that Friday. Apparently two other kitties got adopted that day, neither of which were AJ. AJ was adopted on Wednesday by Melissa as reported and, that in itself was all that really mattered — until this past Friday.

On Friday, after little more than a week, Dani Ryan, founder of MeoowzResQ, received an email from AJ’s adopter saying that he wasn’t working out and did she still have room for him! Melissa said that her two cats were not accepting of AJ and she was afraid for his safety. MeoowzResQ had pledged to help whoever adopted AJ with any medical needs he had at the time so, of course, agreed to take him as they had initially intended.

Will there be a Happy Ending for AJ and His Teddy Bear?

Melissa brought AJ and his teddy bear to Dani this morning. She was very sad as she had grown attached to AJ but said one of her other cats kept attacking him. She had worked on the introduction several times over the past 10 days and it just didn’t work. She feels AJ deserves better and hopes that MeoowzResQ will be able to find him another loving home. Melissa also brought some of the food he likes and a nice carrier. 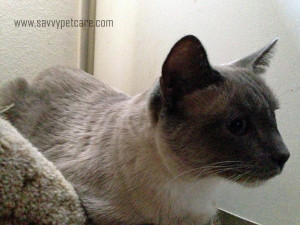 AJ in his foster home

I was there when Melissa brought AJ. I had come to meet her and pick him up — I’m happy to say that I am AJ’s foster! I tried to get a good photo of him but he really just wants to hide right now. After he has had some time to settle in, I will introduce him to some of the cats at my house and see how he does. I will evaluate him to see what type of home might be best for him. He seems like such a sweet guy! I’ll keep you posted.