Dieter, my standard schnauzer, has never seen a shelter that I know of. He is a rescue dog none-the-less. He is lucky that the police did not shoot him. Let me tell you his story. 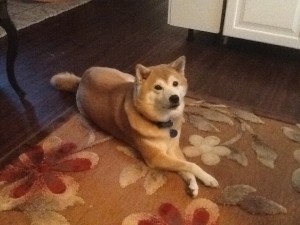 I have had Asia, my Shiba Inu, since she was seven weeks old. She is now 12 and starting to move a little slower. I have wanted a second dog for quite some time and have been looking at several breed types.

I got a call from my cousin, Jody, who knew I was looking for another dog. She said that her friend down the street found a schnauzer. They really liked the dog but had too many dogs to keep him. We made arrangements to meet and I went to her house the next day. She started by telling me his scary story. 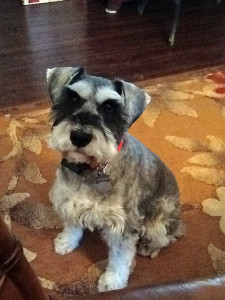 Her husband is a truck driver for Safeway during the week. He and a couple of other coworkers rent a house where they stay during the week, going home on the weekends. One night, around 2 am, they heard a lot of barking outside. Figuring it was just coyotes, he went outside and shot off a couple of shotgun rounds into the air. The barking stopped and he went back to bed.

The next morning, when he walked out of the house, he found this raggedy dog stuck under his truck on some tape he could see wrapped around his body. He then noticed that in the tape was a black box looking much like a bomb. My friend immediately called the police who came out directly. They looked at the dog who was still stuck to the undercarriage of the truck and after much ado, decided it wasn’t a bomb and crawled under the truck and rescued this terrified little dog. My friend said he looked like he wasn’t starved and clung to him for security. They cut the tape to find the box was an old internet router box.

Where he came from, there is no way of knowing. Our best speculation is that kids took or found him and did this to him. He either got away or they just let him go. Either way, it was terrifying and traumatic for him. Poor baby… My friends assured me that they had posted several ads and called all of the shelters in the valley and after two weeks, the only missing schnauzer was a female.

Dieter is a total sweetie with a few little issues we are working on. Since the first time he figured out he can use the dog door any time he wants, he is in and out all the time. I can’t recall the name they had given him, but Dieter is a good German name. He has been with us since late December 2012, and Asia, though more tolerant now, still treats him like a bad smell in the room. But we love him greatly and he will spend the rest of his life here with us.