Home Art The Colorful Cats of Andy Warhol — via hauspanther

The Colorful Cats of Andy Warhol — via hauspanther

Did you know that Andy Warhol was a huge cat lover? He and his mother, Julia Warhola, both loved cats and had several of their own, all named Sam except for one called Hester.

In the 1950s, before Warhol became famous for his pop art, he worked as an advertising illustrator and graphic artist. During this time he created numerous whimsical drawings of cats. He even created a limited edition artist’s book 25 Cats Name Sam and One Blue Pussy (that’s not a typo, the d was originally left off “Name” in error, but Warhol liked it and kept the mistake.) Apparently the cats in this book were based on the images of the famous cat photographer Walter Chandoha, not Warhol’s own cats. The original copies of 25 Cats Name Sam and One Blue Pussy were given by Warhol as gifts to clients and friends (an original sold in May 2006 for $35,000), but it has been republished and used copies can sometimes be found on Amazon.

Reproductions of all the cat images can be found at Allposters.com for as little as $9.99 US. 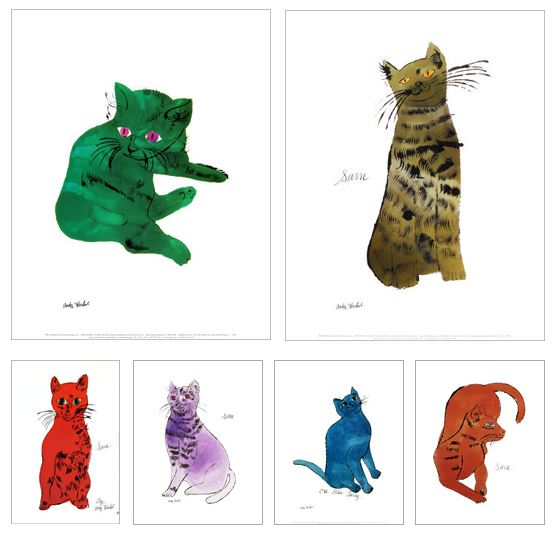 See more at The Colorful Cats of Andy Warhol — hauspanther.