Pet Rabbits: Cute and Cuddly or Bossy and Domineering?

I’ve been following Speedy the Cheeky House Bunny for quite a long time. He lives in England and has lots of adventures, both indoors and outdoors, with his mum, Rachel. I was delighted when she agreed to write a guest post to share her knowledge about pet rabbits. 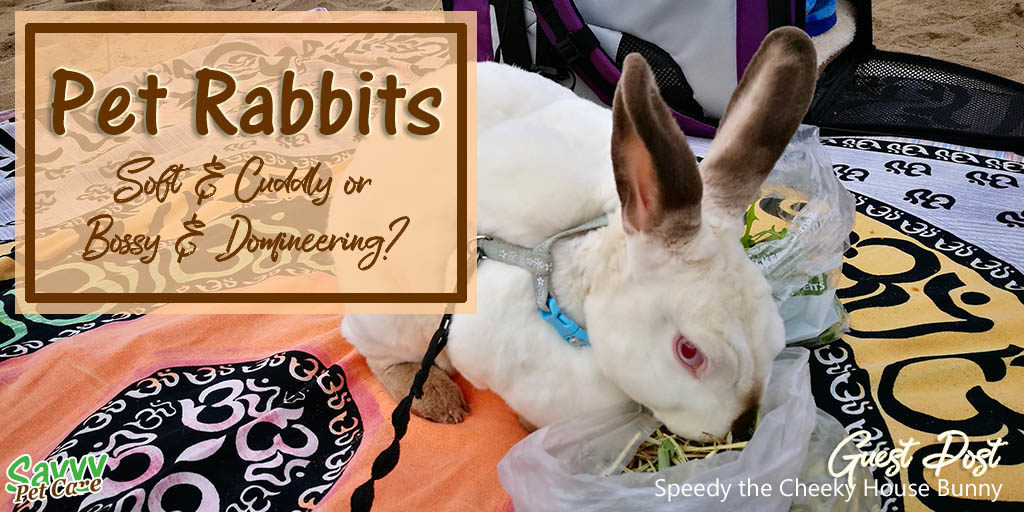 Are You Ready for the Bossy, Domineering Personality of Pet Rabbits?

Most rabbits actually don’t like to be picked up and cuddled. Yes, they are cute and fluffy but not always in a nice way…they are very bossy and domineering. At times they can bite and their teeth are sharp as razor blades. And they have long, hard and sharp claws that can scrape you to pieces….oh, and they can growl, too, when they are in a bad mood showing their best disapproval of things they aren’t happy with. Most people think donkeys and mules are stubborn, but they haven’t got a patch on rabbits. But they can also be funny, playful and loving.

So, that being said, rabbits can make great pets for many people if they do lots of research and educate themselves on the care of rabbits. There are many people who haven’t the time to walk a dog or who live in an apartment and don’t have the space that a dog needs. Many people are allergic to dogs and cats but not to rabbits. For people like this, a pet rabbit can give the companionship that dogs and cats give. And some rabbits can become accustomed to walking with a harness and leash and traveling about in pet strollers.

The cider press at Buckland Abbey

Pet rabbits encourage a more healthy lifestyle because they are herbivores. You will develop the habit to stock up on lots of fresh vegetables and fruit. Rabbits can live 10 to 12 years though I have known of rabbits that have lived much longer than that.

Rabbits are very social creatures and love to snuggle up with you and play with you once they have learnt to trust you. The highest honor is when a person gains the trust and love of a rabbit. That love and trust opens the door to an amazing, loving friendship, one that is filled with so much fun and laughter. You’ll be wondering why you didn’t open your home to a rabbit before when you watch all the antics your rabbit does like the jumps, skips and hops called binkys, or when they smell banana and try to climb all over you just to score a bite of that tasty snack!

So if you’re thinking of getting a rabbit for a pet, you first need to learn as much as you can about them and how to take care of them from places like House Rabbit Society. Then find a vet who specializes in the care of pet rabbits – not all vets do. And then find a local shelter or rescue that has rabbits up for adoption….there are plenty of rabbits waiting for their forever home…. 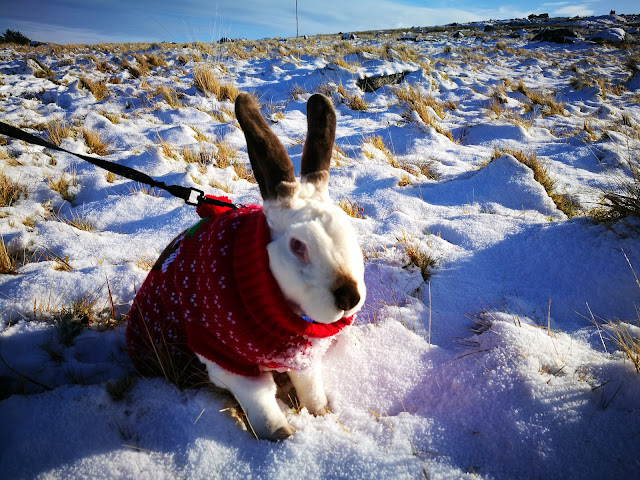 I don’t know about you but snack time is important to a bunny. So when a bunny is snacking, it’s best to let them get on with it. They have to be grazing and snacking on and off constantly throughout the day to keep their delicate tummies working. They might stop for a nap or to play and explore, but the first thing they think of when they wake up is their bellies! And if you’re late with their salad, they can be grumpy bunnies indeed.

What Can a Rabbit Eat?

The best diet for a rabbit is a varied one. I try to put together interesting salads and these are the favourites of Speedy, my own rabbit: 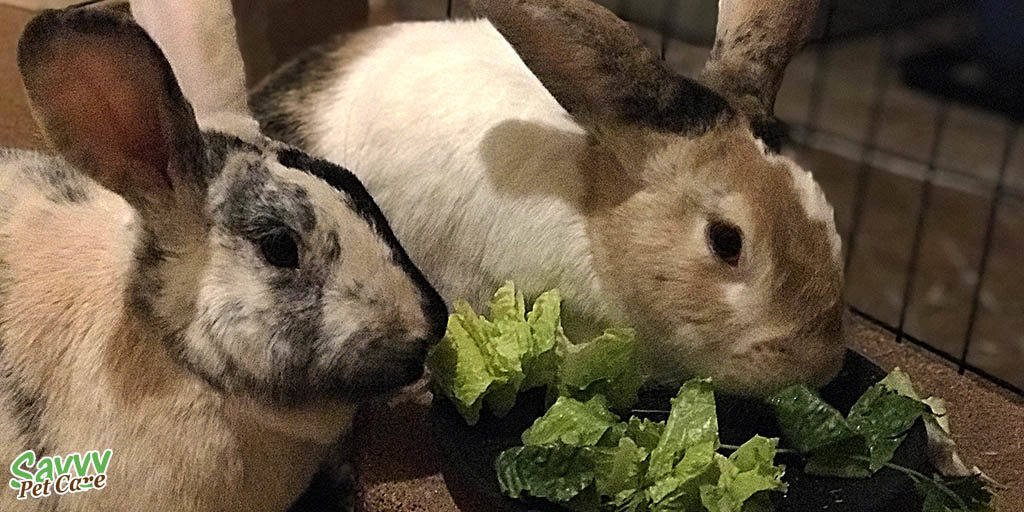 These are the main items that I give to Speedy and I like to mix it up a bit with some foraging and some extras from the supermarket: 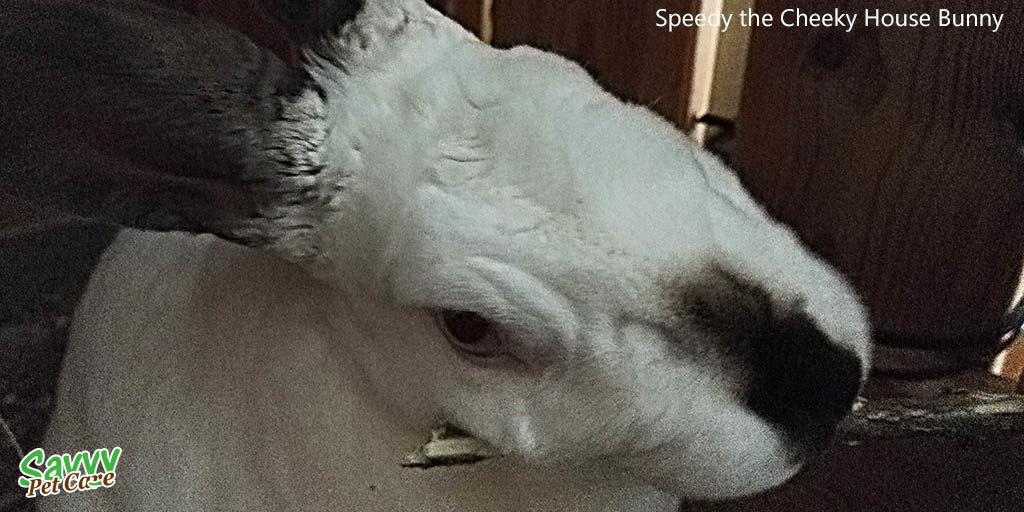 And, as an odd treat, I give a tiny piece of banana or apple or carrot.

There are many other things that rabbits can eat but they are too numerous to list. With a little research on good rabbit sites, you can find out what else is good for rabbits to eat.

Rabbits have 28 teeth that are constantly growing and have to be worn down by the food that they eat. A group of rabbits is called a herd. Did you know that horses have the same type of teeth in that they constantly grow and have to be worn down by the food they eat? Horses also share the same type of eyes in their vision and construction as a rabbit and their ears also work in the same way as a rabbit. A group of horses is called a herd and horses share the same diet. So is a rabbit an under grown horse or is a horse an overgrown rabbit? What do you think? 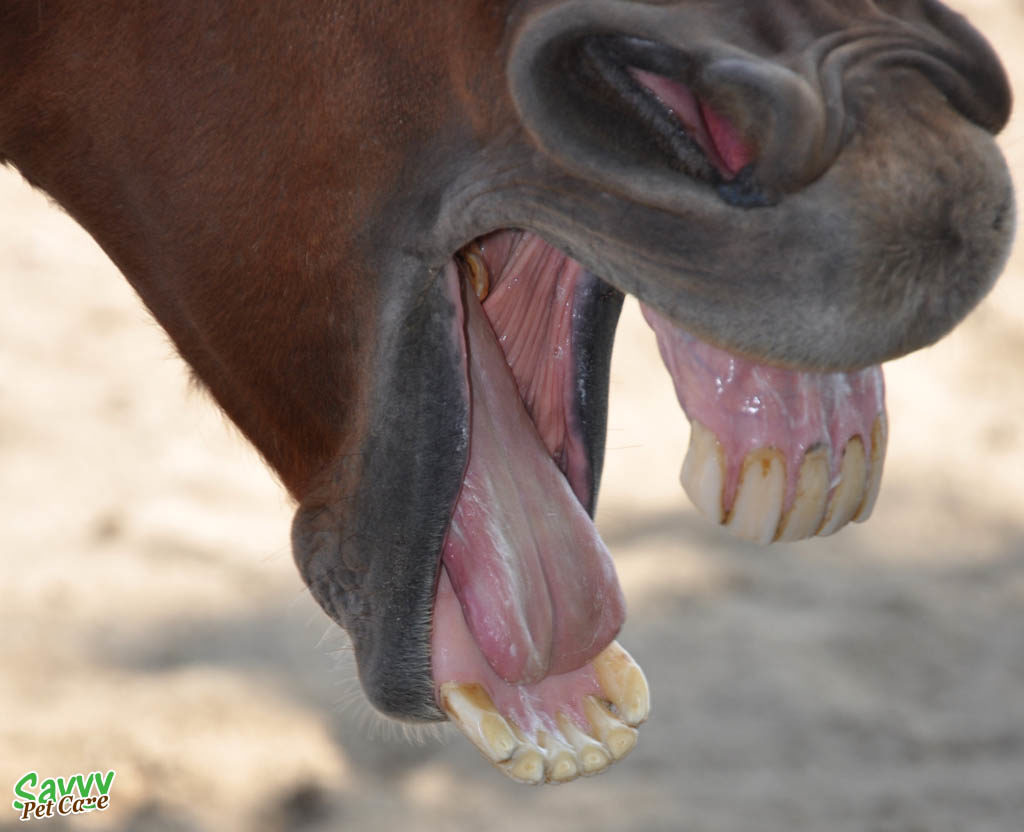 Pet Rabbits and the Vet

Did you know that pet rabbits need to have regular health checks at the vets? In a rabbit health check visit, their weight and teeth are checked plus their heart and eyes. The vet does a physical feel over and around their tummy to make sure that is in working order, too. In the UK and Europe, rabbits have to get vaccinations as well as there are three viruses that are fatal.

There is also RVHD type 1 and RVHD type 2. Type 1 has a short incubation period and type 2 has an incubation period of up to two weeks before a rabbit shows symptoms. Again cottontails and black-tailed jackrabbits aren’t really affected by these two viruses. It is fatal only to the domestic and European wild rabbit populations. Cases are rare in the US and don’t spread beyond local isolated outbreaks in the domestic rabbit populations.

In the UK and Europe, we have vaccines that cover all three viruses. They only have the vaccine for RVHD type 1 in Australia as rabbits are considered pests. In some territories, they are illegal as a pet and the wild populations are a big problem.

In the US, there are no vaccines available at this time for the three viruses as outbreaks of all three viruses are rare. They occur in isolated pockets in the domestic populations and don’t affect the cottontail and black-tailed jackrabbit populations so they don’t spread very far. 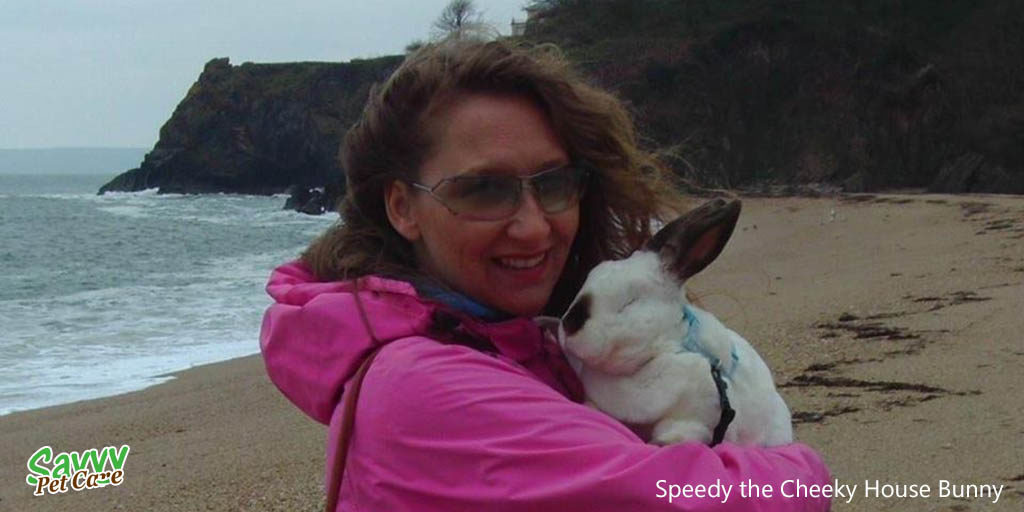 Another interesting fact is the rabbits do most of their communicating through scent. Did you think only kitties and doggies read pee mail? Well, actually, rabbits not only read pee mail but they also read poo mail and sent gland mail. They leave their replies too! So every time they poop or pee they are saying this is ours and we are here loud and clear! They also are telling you if they are a boy or a girl and what they eat. Every time they chin something they are telling you this is mine. Who knew that could tell you so much?

Domestic rabbits come in all shapes, forms and colouring and the same goes for their ears! The most interesting fact about a rabbit’s ears and hearing is that rabbits can distinguish sounds from two separate directions at the same time. They can independently move each ear 270 degrees toward a sound giving them 360 degree hearing. A rabbit’s hearing range is 360 hertz to 42,000 hertz compared to a humans which 63 hertz to 23,000 hertz. They also can hear things up to two miles away! This is why it is almost impossible to sneak up on a rabbit!

Many people think that rabbits are night owls and that they are most active during the night. That couldn’t be further from the truth! Did you know that rabbits are actually a crepuscular which means they are most active at dusk and at dawn? It seems rabbits prefer the twilight hours! That is because their vision is best adapted to the light conditions at those times.

Did you know that rabbits have around 18 naps a day and that it’s rare for bunnies to sleep deeply? They have to feel very safe and happy and in complete contentment and have trust in those around them to sleep deeply. When they do sleep deeply, it is called the dead bunny flop or DBF. It scares us pet rabbit owners so much that we quite often have to check that they are breathing, which unfortunately can wake them up. A sleeping rabbit is just adorable to watch. I always let Speedy sleep as I can see and hear his breathing. Speedy snores a little! 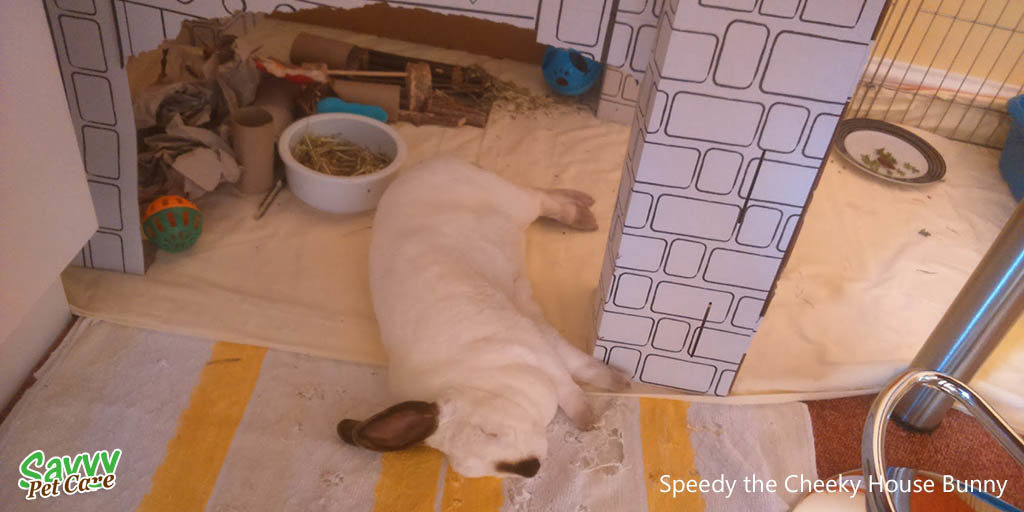 And then there is a rabbit’s tail. Did you know that a rabbit’s tail is an escape mechanism? That white fluffy tail you see on European wild rabbits and cottontails allows predators to focus on one part of the rabbit’s body. A wild rabbit runs very fast, up to 45 miles per hour. When trying to escape, it sharply changes direction. When that happens, the predator loses focus and has to slow down to refocus on where the rabbit is. This then gives the rabbit time to escape and disappear from view. Who knew that something as simple as a white fluffy tail could be crucial to a rabbit’s survival?

There are so many interesting things about rabbits that I could go on and on. But where would the fun be in that if I did all the research for you? So go on, go find out for yourself!

Pin It for Later 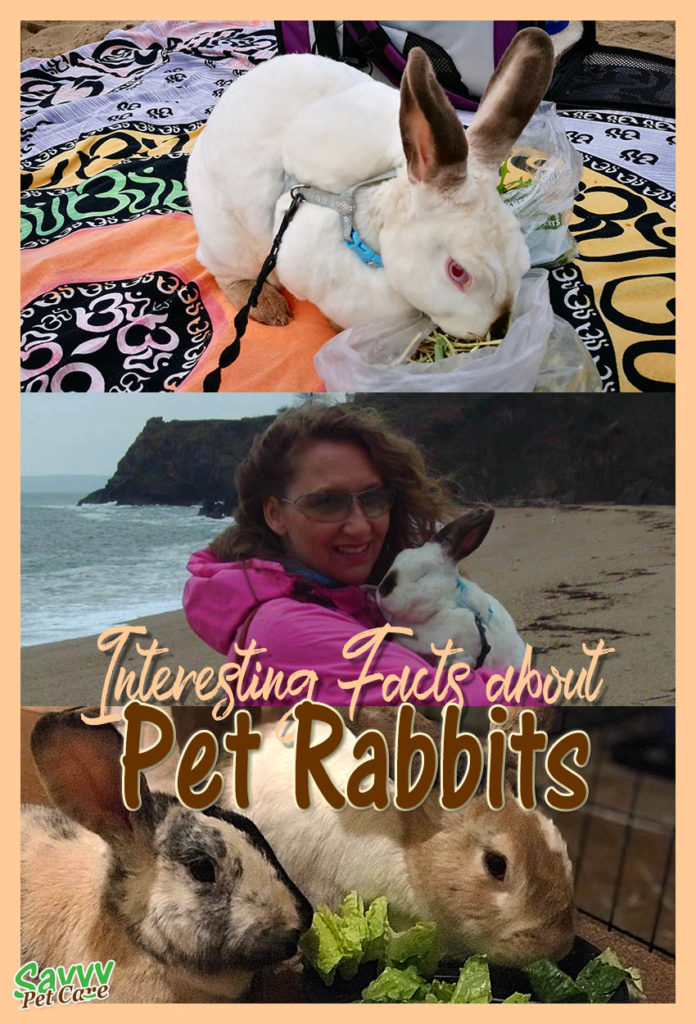 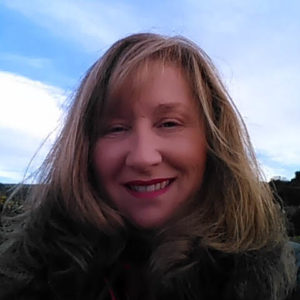 I’m Rachel, Speedy’s Mum, and with Speedy’s help I write his blog and social media outlets. I have had rabbits for 25 years along with dogs and cats over the years. Speedy is the only one I share with the world as he’s a special bunny who has no fear of any thing. This allows us to have many adventures which would not normally happen. Now I’m sharing my own personal experience and knowledge to show how great rabbits are as pets with the right planing and research.