Over the years I have spent a small fortune on pet doors. Many shapes, sizes and brands have come through my home. This article is based on my personal experience and opinion of the several I have owned.

First of all let’s talk about whether you would or should have a pet door. There are many situations where a pet door can be convenient but, as with everything else as a pet owner, you must be responsible with your pet and what your pet does. For example, a dog that tends to go out and bark in the middle of the night may need to be locked in at night or you will have angry neighbors.

I had a friend who lived in an apartment with two cats and two roommates. The cat box was in the shower of the downstairs bathroom. She wanted her cat to sleep with her in her room but, with roommates, felt uncomfortable leaving her door open at night. This meant having to get up to let the cat out to use the box in the middle of the night and then again when he wanted back in. Her solution? She went to the local home improvement store and purchased another door. She had her dad install a cat flap into the door and install the door into her apartment. Problem solved and the cat really liked the fact that he had access to the room any time. When she moved, she simply put the original door back and since the door fit her next place, she just did the same there too.

I started out with a simple flap door when I first lived with my mom in Whittier. It was mounted into the door in the back porch. I had a very busy nine-pound terrier mix. She was in and out all day long. The flap door worked great. Because she chased out any and all animals from the yard, I had no worries about leaving it open all the time. After she passed, I didn’t get another dog for many years.

Then I got Asia after moving to Walnut with my brother. She was just nine weeks old. After she got a little older, we installed a screen door flap allowing her into a fenced back yard. She just thought that was great. Problem was, she would hit that door at a full run and the screen just could not take that kind of use. Within a few weeks we had to remove it and re-screen the door.

We then purchased a sliding door panel with a pet door built in. That worked great for many years with only one baby possum getting into the house. Then, one fateful night, Asia discovered why you should leave skunks alone. Oh yes, she got sprayed and proceeded to run through the house in a panic. My brother caught her quickly and bathed her in the traditional methods, but the smell was with us for several weeks. Unfortunately, there was not much that would have prevented the incident, but it was still worth having the door for her.

When it came time to replace that door, we decided to get our first electronic pet door. The first one we had was a regular flap door that had a locking mechanism that was triggered by a controller warn on the dogs collar. This worked fairly well for about six months. The door stopped unlocking, trapping her inside. My brother tried fixing it several times, but eventually we just left it in the open position and forgot about it. When that door wore out, we tried another brand that worked on the same principle. It worked for about the same amount of time and then eventually quit too. When I moved back in with my Mom just before my Dad passed away, she could use the old door that was in the back porch. Though it was small, she managed just fine.

Now, when we moved to Northern California, into the mountains, that was a different story. Here we have squirrels, raccoons, possums, lots of skunks, deer, bears, and mountain lions. In fact I’m locking the dogs in at dusk right now 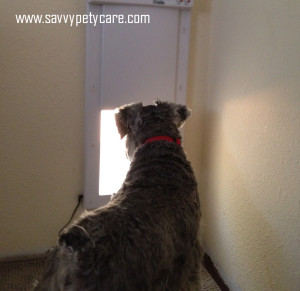 because there was a mountain lion spotted across the street a few days ago. Here, I knew that if I were to install a pet door, it would have to be reliable. I got on line and started searching and found “High Tech Pet.”  They are based in Ventura, California. The door can be mounted into a door or wall. I picked the wall in my room next to an outlet for power.  This door works with a sonic collar, but where it differs from all other doors is, it’s not a flap. This door is a piece of bullet proof glass that opens like a guillotine, sliding up and down. Even better, you can get parts fairly reasonably. I have had it installed for a year and a half, and though I have had to replace collars, the door works great. I have just received a new speaker harness to replace inside the door. It lets the dogs out, but not back in. The wiring harness was quite easy to replace too. The initial cost of the door was a chunk, but for me and where I live, it is imperative that only my animals are allowed access. 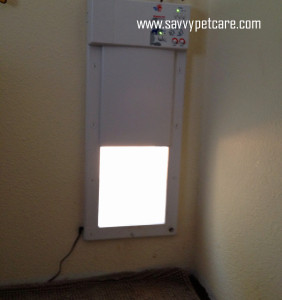 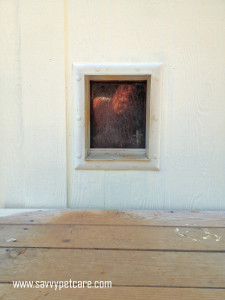 All in all, I would recommend a pet door to anyone who has a safe place for their pet to get out to.