What exactly are odd-eyed cats? An odd-eyed, or bi-eyed, cat is a cat with one blue eye and one of another color, either green, yellow or brown. This is a feline form of complete heterochromia. This condition most commonly occurs in white cats but can occur in other cats that carry the white spotting gene – the gene that makes bi-color and tuxedo cats. It rarely occurs in cats without the white or white spotting gene. 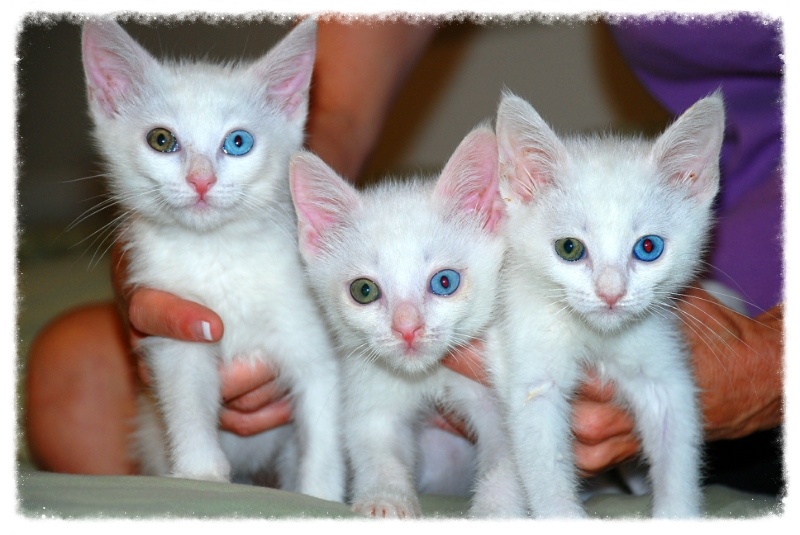 All kittens are born with blue eyes. Normally, melanin (the same stuff that turns our skin brown when we get a suntan) moves into the iris and the eyes begin to change color. By about seven to twelve weeks, the kitten’s eyes have turned the color they will remain, although additional changes can occur for several months. If no melanin moves in, the eyes stay blue.

It is a common misconception that all white cats with blue eyes are deaf. Only some white cats suffer from congenital deafness caused by a degeneration of the inner ear. This condition is associated with blue irises. In white cats with mixed-coloured eyes (odd-eyed cats), it has been found that deafness is more likely to affect the ear on the blue-eyed side.

Some cat breeds are more likely than others to have odd eyes such as the Turkish angora, Turkish van, and Japanese bobtail, although any cat with the white or white spotting gene can develop them. Complete heterochromia is rare, and because of this, Turkish angora cats with blue and amber eyes are considered a national treasure in Turkey. In 1817, the government of Turkey, in conjunction with the Ankara Zoo, began a meticulous breeding program to preserve and protect pure white Turkish angora cats with blue and amber eyes, a program that continues today. Turkish folklore suggests that “the eyes must be as green as the lake and as blue as the sky.”

A MeoowzResQ Facebook follower relates that “when my family lived in Ankara, Turkey years ago (in the late 70’s) we noticed that there were tons of feral cats wandering around the city. One of my dad’s Turkish coworkers told him that according to local lore, Mustafa Kemal Attaturk (who led the people to rebel against the autocratic Ottoman Empire, founded the Democratic Republic in 1923 and was its first president) was supposedly going to come back, reincarnated as a cat – specifically a pure white Angora cat with the dual toned eyes (“Van Kedisi” in Turkish). Others believed that Attaturk’s successor would be identified by a bite on the ankle from one of these cats. As a result, it was thought to be bad luck (bad form, bad karma, bad what-have-you) to put any stray cat to sleep just in case, but these pure white cats are widely sought after and immensely pampered. The word Angora comes from a derivation of the name Ankara, the capital city where Attaturk established the Democratic Republic, and where many of these cats originate.”