7 Things You Can Do to Stop Garbage Scavenging Dogs

Returning home to find that the family dog has found its way to the nearby trash can can be both frustrating and unnerving. This undesirable dog behavior creates unwanted messes that can be a tremendous source of irritation to the dog owner. Additionally, the behavior poses a threat to the dog who could ingest food that has gone bad or choke on something not intended for consumption. Fortunately, this age old problem comes with solutions that can be quickly and easily implemented to ensure that the garbage remains where it belongs — in the trash can!

Steps You Can Take to Stop Garbage Scavenging Dogs

Of course, the younger the dog, the easier it is to stop this. But here are a few ideas that may help with garbage scavenging dogs…

Drop several coins into a soda can. Seal the top of the can with duct tape. 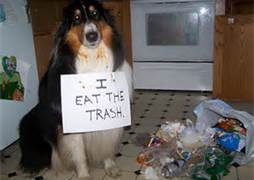 When the dog approaches the trash can, shake the can aggressively at the dog. The unpleasant sound will keep it away. For the puppy, it becomes a scary place to avoid.

Place an indoor pet training mat in front of the trash can. When the dog steps on the mat it releases a harmless, but unpleasant static shock that will create an aversion to approaching the trash can. In the past, the safety and humanity of electronic devices has been questioned. However, present day electronic devices have made great strides in becoming a safe and effective means of dog training.

Purchase a trash can that locks shut. There are several companies that design locking trash cans with the purpose of keeping garbage securely in the trash can.

Install a snapping device, which is similar to a mouse trap except it has a large plastic flap that will keep the dog safe from harm. When the dog begins rummaging through the trash can, the device will snap shut. The dog will be frightened and reluctant to return to the trash can.

For indoors, you can spray some of your perfume on the can. I have heard that this can actually work.

You can also put some of that bitter apple spray on the outside, where he might touch it, if he still tried to get into it. Bitter apple is safe. You can get it at the pet store. It’s really most useful to stop chewing, but you might even set up a trap for him, with your current trash can, and put the bitter apple on some things in the top of the can. See if he is put off from the bitter apple.

Febreze makes a carpet spray that is supposed to get rid of pet odors. For some reason some dogs HATE the smell of it.