Probably the worst call you can get is for a sick animal. I got that call about my horse Sequoia on Wednesday of last week. I currently board Sequoia with Patti who called me and said she thought something was wrong with him. She explained how he had not eaten his pellets from the night before but he did eat his hay. My first and foremost thought with Sequoia is the big C word “COLIC!”

I asked if the water trough had been as low as normal and she thought for a moment and said no, there had not been as much water drunk, but it had not raised a flag for her. I told her I had gone through this with him many times before in summer. It gets really hot and he gets a little tummy ache and quits drinking the water needed to keep his gut moving, then he feels worse and it just escalates from there. I also asked if he was pawing the ground or kicking at his belly and she said yes. Though she did not notice him on the ground rolling, I already knew it was colic. He has done this almost every year since he was a baby when it gets really hot. I don’t know about you but when I get too hot I get a sour stomach. That is what happens to him and then he gets impacted, which is like having severe constipation. Ewe! 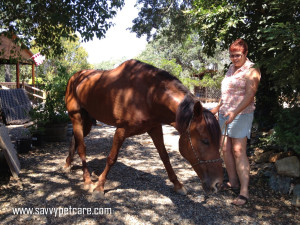 Thank god for Dr. Karlie who was there within an hour. After getting him sloppy drunk with drugs (she calls him a cheap date) she did a rectal and found a small amount of dry apples. But his heart rate was up, his breathing was elevated and he had a slight fever. So up his nose with a rubber hose, and down the hatch with over a gallon of water, mineral oil, something pink to ward off ulcers and another liquid to help break up the impaction. He seemed OK until the next morning, but then about noon all of the symptoms were back. I called Dr. Karlie back and he had to have another treatment. By that night, he had passed a couple of very shiny, loose plops. He was now over the hump. With Pattie’s help, we restricted his feed and wet everything for the first couple of days and he should be back to normal in a few days.

Colic in horses is defined as abdominal pain, but it is a clinical sign rather than a diagnosis. The term colic can encompass all forms of gastrointestinal conditions which cause pain as well as other causes of abdominal pain not involving the gastrointestinal tract. The most common forms of colic are gastrointestinal in nature and are most often related to colonic disturbance. There are a variety of different causes of colic, some of which can prove fatal without surgical intervention. Colic surgery is usually an expensive procedure as it is major abdominal surgery, often with intensive aftercare. Among domesticated horses, colic is the leading cause of premature death. The incidence of colic in the general horse population has been estimated between 10 and 11 percent on an annual basis. It is important that any person who owns or works with horses be able to recognize the signs of colic and determine whether or not a veterinarian should be called. In my opinion, always. Your horse’s life could be in jeopardy if you don’t make a big deal of it.

If your horse has mild colic, he will paw the ground repeatedly with his front feet. He may lie down and get up frequently and look at his belly. He may even attempt to bite at his abdomen.  A horse with mild colic will be less willing to respond to you. He may try and avoid being caught or handled. In most cases, mild colic passes within 24 hours but impaction and twisted intestines still need to be ruled out by a veterinarian.

If your horse has severe colic he will likely throw himself to the ground and roll violently. He may lie on his back and stretch out his legs. This helps relieve the pressure in his stomach. He will not pay any attention to you or what you are doing. These horses are dangerous to work with and require a sedative to be handled safely.

When to Call a Veterinarian

It is important to call a veterinarian as soon as you suspect colic. An impaction or twisted intestine will be deadly if left untreated. You should suspect colic if your horse has any of the symptoms of mild or severe colic. Also suspect colic if you cannot hear normal gassy intestinal sounds and if you note that your horse has stopped producing feces. Feces that is unusually dry is also an early sign of colic. A horse with colic will have elevated respiratory and pulse rates. If your horse’s pulse goes above 50 beats per minute and his respiratory rate gets over 25 breaths a minute, call a veterinarian right away.

Not all causes of colic can be prevented but there are some steps you can take to lessen the risk to your horse. Never overgraze pastures, and if pasture is unavailable provide a good supply of hay. Always make sure your horse has a fresh and plentiful supply of clean water. Keep to a regular schedule when feeding your horse and do not make any sudden changes in the type of diet you provide. Stick to a regular deworming program to prevent parasites. Keep all of your horses’ stalls and paddocks free from objects they might be tempted to ingest.

As pet sitters, both Ava and I are experienced in caring for livestock, including horses. Your sitter’s ability to recognize symptoms of illness while you are away can save your animal’s life.